The water and the chinampas they built were very fertile.  Chinampa comes from the Nahuatl chināmitl /tʃiˈnaːmitɬ/ and is a method by which small rectangular areas of fertile land grow on the shallow lake-beds of the Valley of Mexico.
Tenochtitlan, the capital of the Aztecs became one of the most important and influential cities of their time. They became the most powerful empire that dominated most of Mesoamerica. 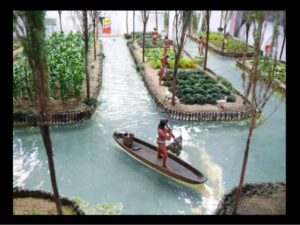 More than 70 temples and buildings were constructed on the city over the lake of what is now the Zocalo of Mexico City.

They created long roads, avenues and canals connecting the entire city and it surrounding areas. They had impressive temples and marketplaces, schools, parks and homes.

This beautiful legend recounts the love story of two young Aztecs,  Xóchitl and Huitzilin, a romance from which the cempasuchil flower was born. This wonderful love story began when the two young Aztecs were still little. They used to spend all their spare time END_OF_DOCUMENT_TOKEN_TO_BE_REPLACED