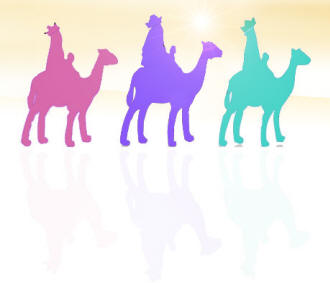 During the era of the kings of France, bread was filled with a lima bean, and the person who found it in his bread would receive the gift that His Highness had prepared for the event.  The idea was to place a lima bean in the bread dough, which was usually filled with fruits like dates and raisins, and this bread was shared around the time of the New Year festivities.

The tradition changed a bit when it arrived to the Americas, transforming itself according to the customs and resources of our country, where it eventually became the rosca.  Here therosca is decorated with pieces of orange and lime, and is filled with nuts, figs, and cherries. Hot chocolate accompanies the rosca.

So every year, on January 6, families all across Mexico gather around their tables to share the rosca de reyes.  And now, instead of finding a lima bean in the bread, a little plastic doll representing Jesus is placed in the bread.  The person who receives a piece of bread with this doll inside has to make the tamales used in the fiesta de la Candelaria on February 2.  This celebration is the last of the Christmas festivities, 40 days after Jesus’s birth.

According to the story, the three Wise Men (called in that time “magicians”, although they were actually astronomers) saw from the far east the birth of a star over the town of Bethlehem, and they discovered the meaning behind the star:  a savior had been born.  They traveled to Bethlehem, and along the way they found the King Herod, whom they told of the birth of the new King.  Herod ordered them to find the baby and return to give the news of the place where the little Messiah had been born.

The three wise men found the baby in a manger, adored by shapers, and they offered him three gifts:  gold, which represented the spiritual wealth of the child; frankincense, which signifies the earth and the sky; and Myrrh, the oil which was used for medicinal as well as spiritual purposes.  Upon their return, an angel warned them that they should not tell King Herod about the birth of Jesus because his plan was to kill the baby.  So the three wise men returned by way of a different path to their homeland.

So every year we celebrate the Epifanía (manifestation) of God on earth to the Reyes Magos…who were neither kings nor magicians.

Spanish When the first missionaries arrived in Mexico, they were faced with a very different way of life than the one they were used to.  The conquest meant not only taking over territories that had recently been discovered as America, but END_OF_DOCUMENT_TOKEN_TO_BE_REPLACED