On one particular but seemingly normal day Frida died for the first time; it was September 27, 1925.  Her and Arias boarded a city bus towards Xochimilco when the vehicle crashed into a trolley and consequently into a street wall. 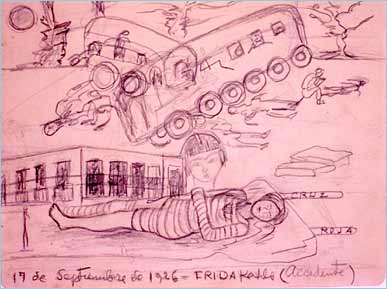 The accident itself was horrid, as it left many people with injuries, but the consequences were more than gruesome for Frida. While the crash’s inertia propelled her into the air, the bus’s detached iron handrail awkwardly pierced the 18-year-old from the hip to the vagina.

The accident left her with a number of physical injuries, among them a broken pelvis, a broken back, dislocated feet, and worst of all with damage to her reproductive system. Aside from the obvious corporal loss, the accident condemned Frida to a sentence of solitude as she was left immobilized in the process towards partial recovery.

Frida’s state during this time was similar to the state of the country and even to that of the world.

Mexico was in the aftermath of the revolution and in the hunt for a defining identity. Likewise, the world was experiencing the consequences of World War I, the most destructive war up to that point, and Frida Kahlo was left to figure out her own path in life after the accident.

In recovery, given her physical limitations and her hampered emotional wellbeing, she found a new passion for painting. She mostly painted herself because as she describes in her own words “I paint myself because I am so often alone and because I am the subject I know best.”

Art drew Frida closer to herself and also to muralist giant, Diego Rivera. After her long rehabilitation, and after she grew apart from Alejandro Arias, she began to socialize once again. Arias had left Mexico for Europe where he corresponded through letters with Frida, bragging about his bourgeois lifestyle, and his love for Italian women.

In contrast, Frida began to resent the affluent members of society and their idiosyncratic attitudes preferring to think of herself as part of the peasant majority that embraced pre-Columbian roots.

Further, there was a dull sentiment in Mexico during this time that gravitated idealists towards each other and in one of the social groups formed by these individuals was the setting where Frida met Diego.

After making sure the figure is completely dry the artisan proceeds to sand the figure down. Sanding can take anywhere from an hour to a whole day. This also depends on the size of the figure. Once the figure has END_OF_DOCUMENT_TOKEN_TO_BE_REPLACED