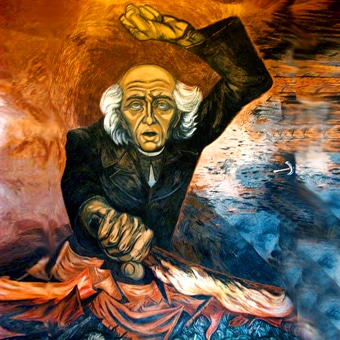 Late one September evening the name of Miguel Hidalgo y Costilla became forever engraved in Mexico’s history.  Since that night, his life as well as that of Mexico changed radically.

Before that historic moment when his voice cried out to demand Mexico’s independence from the Spanish crown El Cura Hidalgo, Father Hidalgo, as he was called, was exactly that — an old priest from a parish in the small town of Dolores, Guanajuato.  It was there that he organized meetings with the townspeople and taught the farmers to work the land.

He was an enthusiastic and hard-working man, always worrying about the well-being of his community.  To help the indigenous, he built an estate where he established a pottery shop, a tanning shop, a blacksmith stable, a carpentry store, and a looming shop.  In addition, he sent for bees from La Habana and introduced apiculture to the inhabitants of Dolores.

Up until that famous night, Hidalgo was a Creole priest, born in a hacienda inPénjamo, Guanajuato in 1753, and Mexico continued as a Spanish colony, one of the most prosperous ones though full of social injustice.

Hidalgo’s liberal ideas led him to join forces with a group of people who opposed Spanish authority.  Together with this group of liberals, among them Ignacio Allende, Aldama, and Abasolo, they reached an agreement in Queretaro to begin a revolution in October of 1810.  However, they were discovered and forced to move up the date to September 16, 1810.   … continued